It allows sell coins, and then rebuy it. You set a sell condition, and then plan when you want to repurchase coins. There at least two possible uses for the Smart Cover trade.

There may be other great ways to use the Smart Cover; it is all up to you.

A Smart Cover trade has a sell condition and one or multiple buy conditions. Sell condition is active from the creation of trade, buy conditions start their work after sell order executes. You can plan when & how to repurchase coins using the Take Profit and Stop Loss sections. A Take Profit describes when you want to buy coins with profit, lower than sold. A Stop Loss describes when you wish to repurchase coins in a loss, higher than sold.

The Smart Cover is accessible from the "SmartTrade" page. 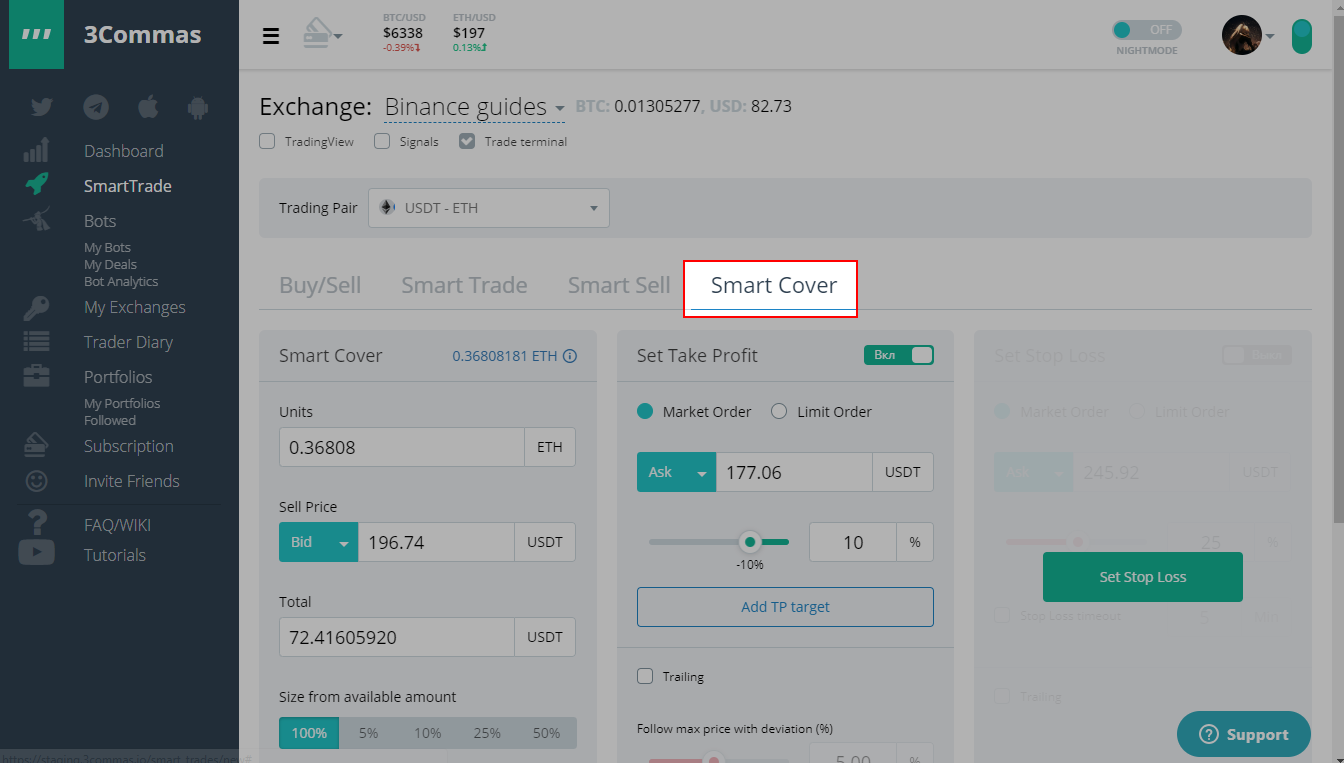 Let's set the sample trade. Imagine that John bought ETH for $250, but the price starts dropping, and now it is at $245. After additional analysis, John's opinion changes and now it is bright for him that the price should drop to levels near $220, and only after there is an opportunity to rise. So John decides to rebuy his ETH. He places a Cover Trade to sell ETH at $245, then to buy at $220. If it won't move down, there is s Stop Loss to buy coins at $250. So what John has now is:

How he sets a sell condition, place a limit order to sell ETH at $245. 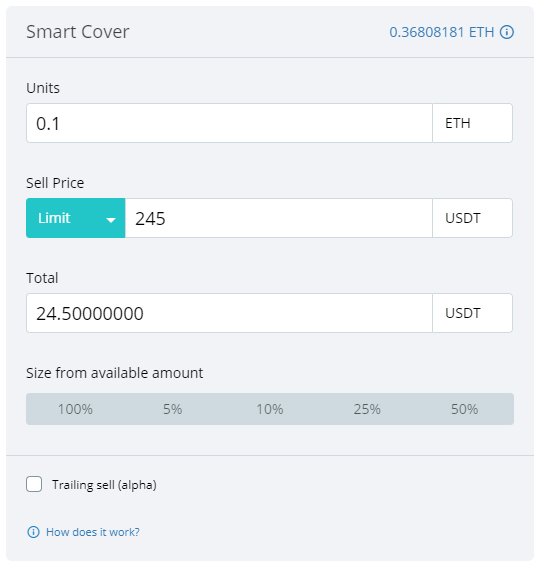 Here is the Take Profit, buy ETH at market rate when the price reaches $220. 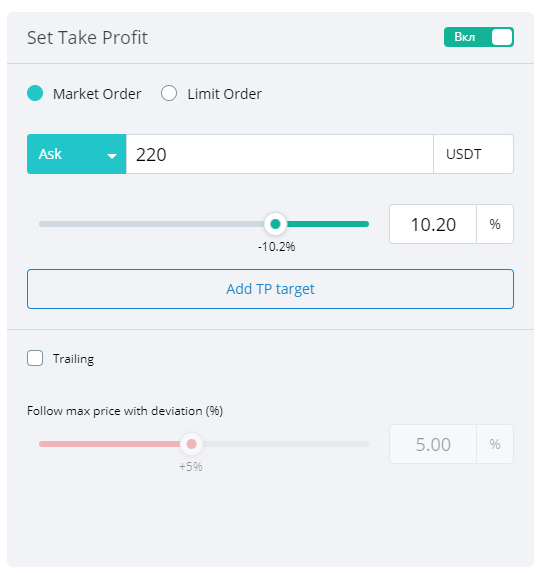 And the Stop Loss, buy ETH at market rate when the price reaches $250. 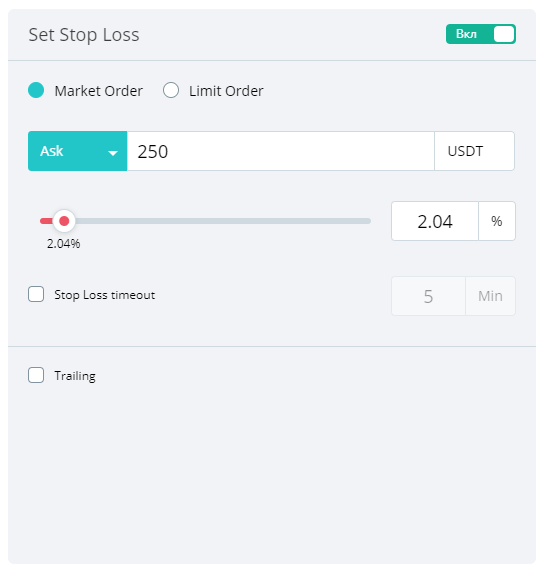 Imagine that John bought ETH for $200, he wants to sell it at $250. He thinks that after the rise to $250, the price should drop to $230. Afterward, it may rise up again. As he doesn't want to miss both opportunities, he set a Cover Trade. He sets the sell condition to $250, then the Take Profit to $230. There is an option to set a Stop Loss near $255-260 levels for the case if the price continues the rise. John doesn't want to take risk of buying at the top, so he disables SL completely. So the resulting trade is:

Here is the sell condition, place a limit order to sell ETH at $250. 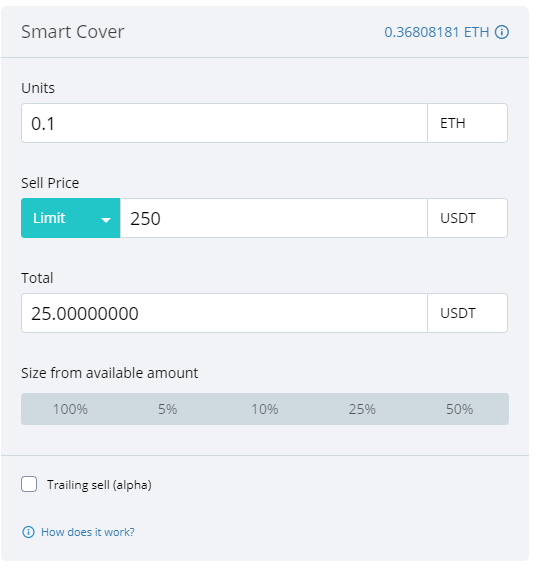 And the Take Profit, buy ETH at market rate when the price reaches $220. 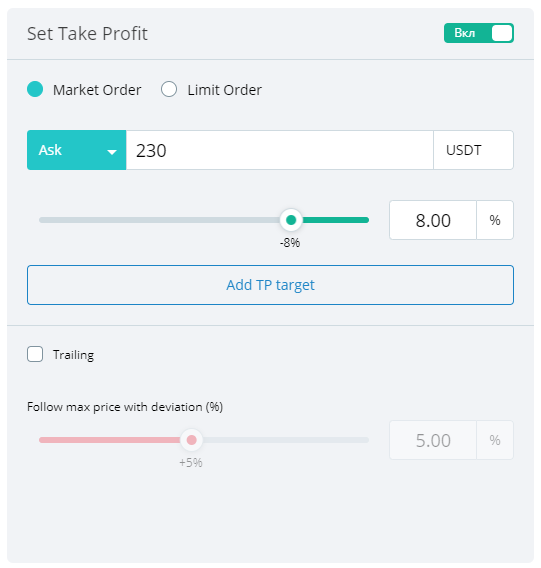 There is no Stop Loss for the trade.

All trailing features from Smart Trade are available in Smart Cover trades.

They have different places, and there may be some confusion. The following info should help with it.

In the Smart Cover section itself, where you plan a sell condition, there is a "Trailing sell" checkbox. Despite the name, it works using the same algorithm as Trailing Take profit. In short, it will try to sell coins as high as possible.

In the Take Profit section, there is a "Trailing" checkbox. The Take Profit in a Smart Cover describes when to buy lower with profit, not sell. So literally trailing here works the same way as Trailing Buy, trying to buy as low as possible.

Finally, the trailing in the Stop Loss section works almost the same way as Trailing Stop Loss, but it trails down. When the price reaches a new low, it moves lower, and so on.