This article will explore the DCA bot's main settings.

The settings page consists of several sections that can be rearranged according to your preferences.

Before we begin, please ensure the "Advanced" option is selected on the top right corner of the "Create Bot" page:

Here you can give your bot a Name, choose the Exchange and choose the Bot type.

Create any name for your bot, you will see it in your bots list and active trades. You can name it by trading pair or settings. But try to create a unique name for your bot so it won't get lost among other bots.

You can choose an exchange account where the bot is going to trade.

You can choose Single-pair for a bot that will trade with only one coin pair.

You can also choose Multi-pair to create a bot that can trade many different coin pairs: 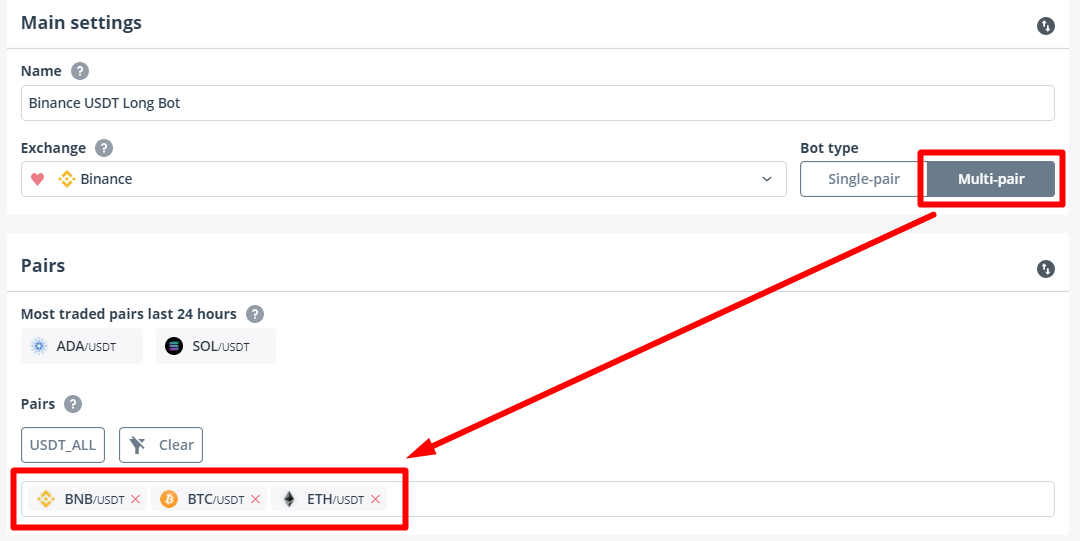 There is a dynamically updated list of coin pairs with the biggest trading volume for the last 24 hours:

You can choose a coin pair for the Single-pair bot to trade with or several coins for the Multi-pair bot:

Note! You can’t choose pairs with different QUOTE currency on the same bot.

For example, you can't select XRP/BTC, ADA/BTC, ADA/ETH, and XRP/ETH on the same Multi-pair bot. In that case, you have to set up two different bots: one for ***/BTC and another one for ***/ETH.

The button "***_ALL" will add all available coins which are traded with the selected QUOTE currency.

The button "Clear" will remove everything from the list.

Here you can adjust more specific settings for your trading strategy.

❗This option is available only for Multi-pair bots.
It means how many deals the bot may open at the same time. If the bot was allowed to trade with 20 pairs, but there are only enough funds on your exchange account to support five simultaneous trades, '5' should be entered here in this field. It allows the bot to start only 5 deals with the coins that you've selected. After one of the trades finishes, the bot will look for the next one to be started by the same criteria.

Long and Short strategies are described in this article.

Here you can choose which currency the bot should accumulate.

This is the first order the bot will create when starting a new deal. If put here 0.2 and select ADA/BTC pair for the bot, then launch it, the bot will buy ADA with 0.2 BTC after the new LONG deal is opened.

Here you can determine what order type will be the Base order - Limit or Market.

This is the profit target that the bot should make from each successful deal. When the bot opens a new trade, it will place the Take Profit order using the percentage that is specified in this field.

How to calculate target profit:
- Percentage from base trade – the bot will determine TakeProfit target from initial order size, without taking total bought volume into calculations. Let's say a deal was opened with first trade size $100 and target profit 5% ($5), after this the price drops. As a result, the bot bought coin on $900 more using safety orders, and now the total trade volume is $1000. The bot will place sell order in a way to get $5 profit (5% from $100) and not $50 (5% from $1000).

- Percentage from total volume – the bot will take profit from total trade amount. From the previous example, the bot will place sell order in a way to get $50 (5% from $1000).

The bot is going to place safety orders after you have opened the trade to average your buy price if coin goes down. This setting determines these safety orders volume. If put 0.2 here and keep other settings as they are, then start the bot and wait for a new deal. When it opens, the bot will place three safety orders on -1%, -2% and -3% from starting price each 0.2 BTC in size.

The maximum amount of safety orders that can be executed for one deal.

The scale will multiply a volume of each new safety order.
Let's assume there is a bot with safety trade size 0.1 BTC and the scale is 2. Safety order volumes would be:

If the bot using not BTC_*** pairs but for example ETH_*** this filter will still use BTC for calculations. The 24h volume will be automatically converted to BTC by actual rate.

If the coin price drops to or below this level, the bot will do selected action. The value should be below the last safety order. The bot calculates stop loss level from the base order price, and not the deal average price.

The bot won't open a new trade until the specified amount of seconds is passed.
A Multi-pair bot has different timers for each pair.

The bot won't open a new deal if the current price is lower than the min one or higher than the max one.

The bot can stop after opening the required number of deals. An empty value will disable this option.

Unfinished deals will affect the amount of already opened deals. If the bot has opened 10 deals, but only 2 are finished, then the setting will count 10.

If the bot is already active when the setting is enabled, only opened deals after that moment will be counted.

Available for Multi-pair bots only.