All Collections
Portfolio & Trading History
Dashboard & Display Questions
Why is there a minus in 'Profit' in some deals?

Why is there a minus in 'Profit' in some deals?

Usually, you see profits like this on the History page. Profit in the selected currency (normally Quote currency): 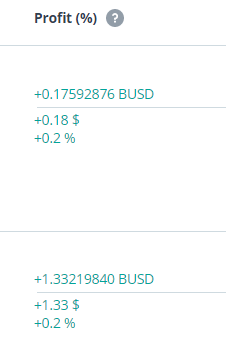 1 - Sometimes there will be a negative value near a positive one.

It can be in the Base currency as well as in the Quote one. The amount could be positive too: 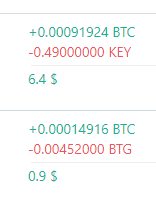 It's a healthy situation, and you aren't losing anything. There is nothing wrong with profit calculations and your final gain is shown below numbers in $. It includes the negative amount too if there is any. In other words, if the number below with $ is green and positive - the deal is closed in profit.

The main reasons for this are the trading fee and the exchange's limitations for the price step and volume step:

To reduce this effect it's recommended to hold some BNBs to pay fees (for Binance), Take Profit should be set to Quote, and Order size should be increased.

2 - But if you see negative values in both fields, your deal indeed closed Take profit in loss.

This could happen only with Market Take profit (Conditional or with enabled Trailing):

the order was sent into exchange order-book, and filled all BIDs (if it is Long deal) on it`s way, so average sell price became even lower than the average buy price.

The reason for this: